Our three dogs had the privilege of becoming food critics recently when they had the chance to try out the Vitality ValueMeal Dog Food, an Australian dog food brand which has just been introduced to the Philippine market.  Our dogs are not exactly nit picky eaters, they eat everything, and I guess they did not object to eating something that is made for canines and they welcomed the change in their diet.

Ging-Ging, our oldest dog at nine years old, her puppy Budoy (they are Aspins by the way) and our adopted pooch Chuchay readily accepted their task of reviewing the dog food. I initially had doubts if they would eat it because they had become used to eating rice and chicken head adobo (that’s their usual fare) apart from eating our left overs but they quickly adapted to their new diet regimen. 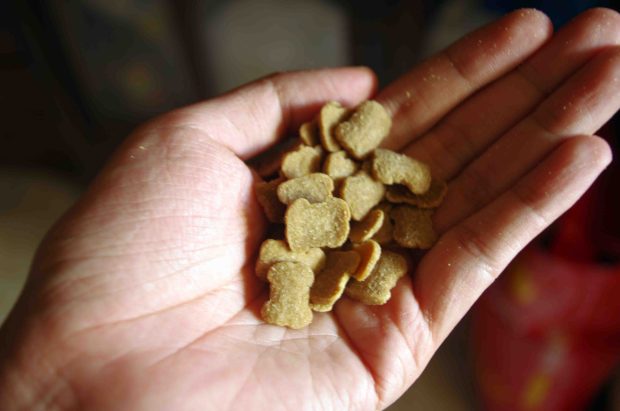 So apart from our observation that they enjoyed every morsel of Vitality ValueMeal here’s what my mother said on its effects on them:

1. The pooch’s poop did not smell as bad as before. Back when they were on their rice & chicken head adobo diet, their poop really smelled. But when we fed them with Vitality ValueMeal something changed in their bowels and the smell of their poop magically dissapeared.

If only for this then we definitely switch to dog food pronto, it is tiring to clean up after them everyday but with their poop sans the smell then it would just be like a walk in the park. Easy breezy, right doggies? Arf, arf!

2. Their coat is much shinier. They used to have dry, life less hair but now it’s much shinier, wala pang salon yan ah.

3. They look forward to their meal times. Our dogs generally love to eat but when we fed them the dog food it was like the highlight of their day especially for Ging-Ging who seemed to enjoy the most because there was nothing left on her plate after every meal time. Budoy who is the youngest of the bunch and more concerned with playing just nibbled some of it and proceeded to his running and chasing routine.

If our dogs could only talk maybe they would shout that it’s AWESOME plus a big paws up. Till our next rant, Arf, arf. 🙂

This site uses Akismet to reduce spam. Learn how your comment data is processed.

A blog that writes about Korean dramas.

WITHONESPAST
From A to Zachary

The ins and outs of being a mom - Zach's mom.

Traveling between the mind and the heart

Sharing the world through my Windows (phone)

Reflections on a Life Online: Mobile Technology, Net Culture, Social Media, Music, Film, the flotsam and jetsam of twenty-first century life in this part of the world

Online jottings of a Filipino out of time

A Non-Sense Manileño Who Talks About Sensible Things

Animation: The Illusion of Life